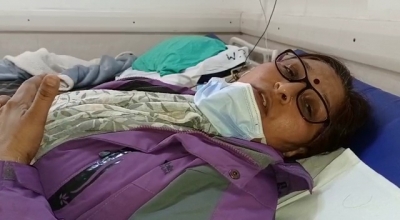 Greater Noida: A female doctor was physically assaulted by her neighbours for opposing an illegal construction in Greater Noida. A video of the incident has gone viral on social media.

Cases of illegal construction and disputes related to them have been on the rise in the societies of Noida and Greater Noida.

According to sources, the victim, Rashmi Sharma, lives with her elderly parents in Jalvayu Vihar Society and is posted in Primary Health Centre, Dankaur.

Her neighbour Arun Kumar and the women in his family assaulted her which resulted in serious injuries on her head and hand.

The victim is undergoing treatment at the district hospital.

Sharma said that the accused misbehaved and brutally assaulted her.

She alleged that the police, after receiving a complaint, pressed minor charges and released the accused.

It was seen in the video that the victim’s parents were pushed and assaulted when they came to her rescue.

Sharma alleged that the accused constantly engaged in illegal construction which she protested against and had complained in the Resident Welfare Association (RWA).

The RWA had put a ban on the construction but to no avail.IANS