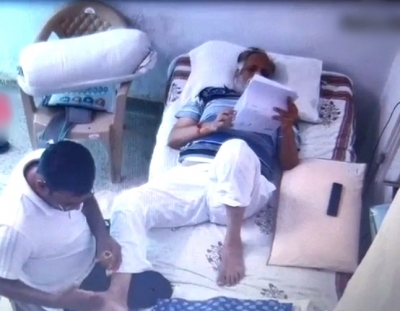 New Delhi:  A CCTV footage of Tihar Jail has surfaced in which Delhi minister and AAP leader Satyendar Jain could be seen getting a massage.

The footage of jail no 7 has also been accessed by IANS.

Earlier, the Enforcement Directorate (ED) had told a Special PMLA court that Jain was having luxurious facilities at Tihar Jail.

“He has prima facie been found to have committed irregularities that warrant inquiry,” read an recent order of LG.

As of now, no official has commented on the matter in connection with the video that has surfaced.

Jain was arrested on May 30 under the provisions of the Prevention of Money Laundering Act.

Jain was in de-facto control of shell companies used for alleged money laundering, and the co-accused persons Ankush Jain and Vaibhav Jain were just dummies.

They were accused by the CBI for allegedly hatching criminal conspiracy, cheating and criminal misconduct.

The ED learnt in the investigation that Awasthi and others in IFFCO generated proceeds of crime and layered it through various unrelated entities and part of PoC was then transferred to the entities controlled by them.

The allegations include receipt of illegal commission by the accused from the overseas suppliers through a complex web of fake commercial transactions through multiple entities registered outside India (controlled by the accused persons) to camouflage the fraudulent transactions as genuine.

“Awasthi (father of Amol Awasthi & Anupam Awasthi) and Parvinder Singh Gahlaut (father of Vivek Gahlaut) wield considerable influence in the Fertilizer industry by virtue of their position as Managing Director of IFFCO & Director of IPL (U. S. Awasthi) and Managing Director of IPL (Parvinder Singh Gahlaut). Such payment of commission to them through their sons bleed the coffers of IFFCO & IPL and is a fraud upon the shareholders of IFFCO & IPL which consists of many State Marketing Federations wherein stakes are held by various State Governments,” the ED said.

Earlier, Enforcement Directorate had arrested Jain’s business partner A D Singh and Alok Kumar Agarwal with whom he had business relations. A D Singh had also received Rs 27.79 crore from Dubai through illicit means. Both Jain and Singh has used the vehicle provided by Agarwal to receive the Proceed of crime in India.

The ED had also filed a Prosecution Complaint before a Special Court in 2021 against six accused.IANS