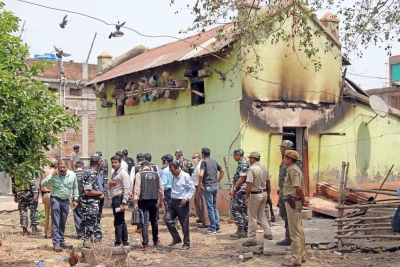 Kolkata: After over eight months of searching, the Central Bureau of Investigation (CBI) nabbed Lalan Sheikh, the principal accused behind the massacre at the Bogtui village in West Bengal’s Birbhum district.

Eight persons were killed in the carnage that happened on March 21.

CBI sources informed on Sunday morning that Lalan Sheikh was nabbed following a special raid by a team of investigating sleuths late Saturday night. However, the central agency sleuths refused to disclose other details relating to the matter, including the place from where Sheikh was arrested.

The Bogtui carnage was a result of revenge- killing following the murder of a local Trinamool Congress leader, Vadu Sheikh.

Lalan Sheikh was the right-hand-man of Vadu Shekih and soon after the latter’s murder he assembled his associates and launched a late- night attack on the Bogtui village with bombs and inflammable items. Lalan Sheikh was absconding since then and the CBI sleuths had been conducting marathon search to track him since the central agency took up the parallel investigation into both Vadu Sheikh’s murder as well as the Bogtui carnage, as per an order of the Calcutta High Court. The court had observed that the two events were inter-linked.

The preliminary investigations have revealed that Vadu Sheikh’s murder was a result of the internal gang- rivalry over the share in illegal stone quarries and sand mining in Birbhum district. Investigation also hints towards factionalism in ruling Trinamool Congress considering that both the victims and the accused had affiliations with the state’s ruling party.

On Friday (December 2), the CBI informed that it had arrested Safi Sheikh alias Sazizul Sheikh, one of the prime accused in the murder of Vadu Sheikh. On the same day, Rampurhat sub-divisional Court, remanded Safi Sheikh to four days of CBI custody.