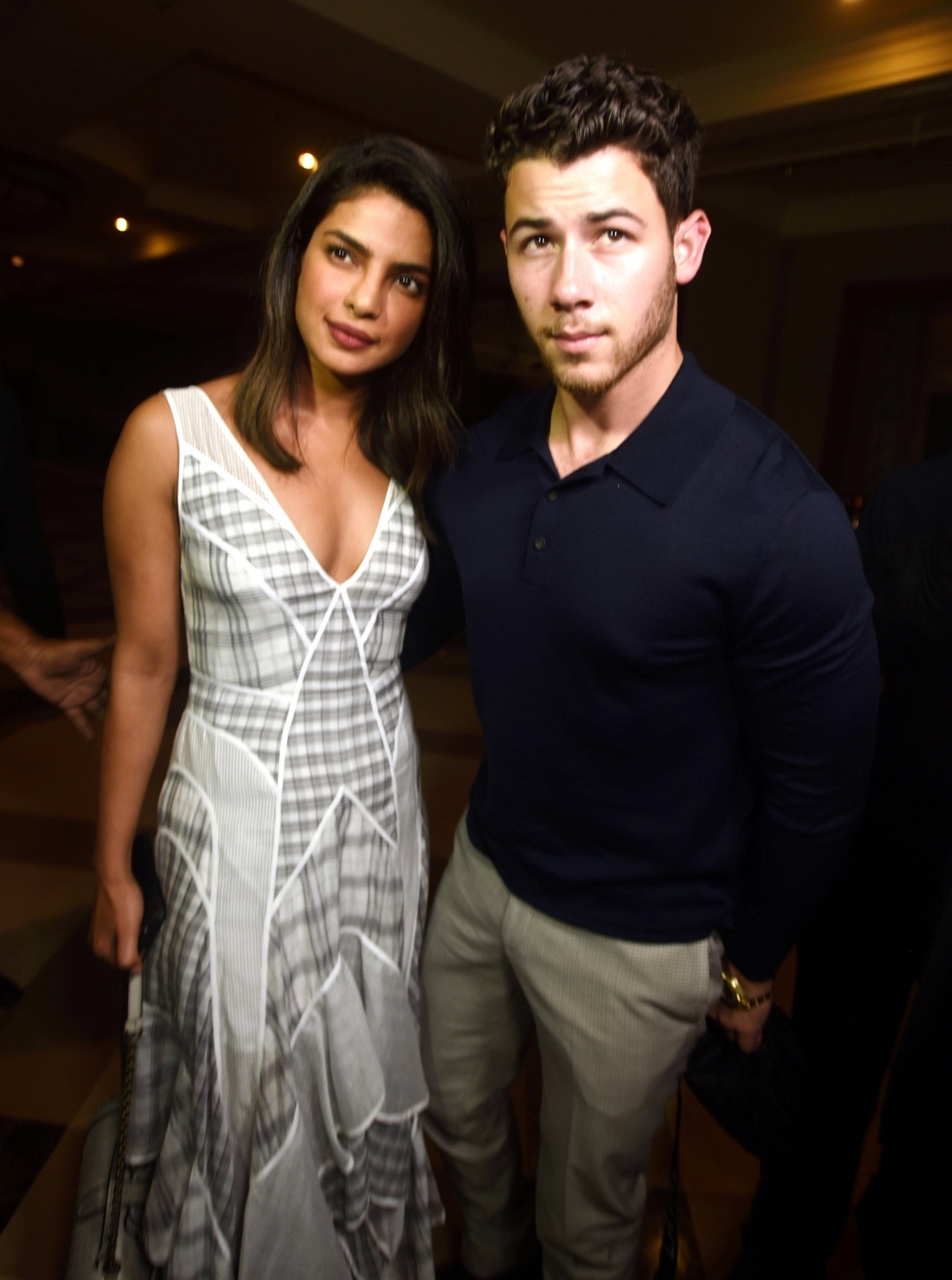 Aug 18, 2018
Mumbai: Actress Priyanka Chopra and American singer Nick Jonas on Saturday solemnised their relationship with a traditional Indian ‘roka’ ceremony — considered the first wedding ritual for Punjabis — in the presence of their close family and friends here.

The ceremony, held at Priyanka’s residence, follows months of speculation around the relationship status of Priyanka, 36, and Nick, 25. The photographs from the ceremony did the rounds on social media, but an official statement or update from the celebrities is still awaited.

“The colour is as auspicious as the embroidery is intricate to celebrate this sacred and romantic occasion,” the designers said in a statement.

Nick wore a pristine white kurta churidar as he performed the ‘puja’, with his parents also dressed in traditional wear for the ceremony.

One of the photographs shows Nick cosying up to Priyanka, who holds on to him, as they stand against a green background with a logo that reads ‘NP’ — merged together to denote the amalgamation of the first letter of both their names.

The ceremony was attended by Priyanka’s cousin Parineeti Chopra, as well as celebrities like Arpita Khan Sharma, Mushtaq Sheikh and Srishti Behl Arya.

The increased activity at Priyanka’s residence since the past two to three days had indicated preparations for a celebration. On Friday evening, people were busy decking up the semi-circular balcony with green foliage.

A star-studded party for close friends is likely to follow on Saturday evening.

The Jonas patriarch even carried a big Tiffany & Co. bag in his hand, fuelling the rumours about the formal ceremony to celebrate the couple’s engagement.

According to international media reports, Tiffany is the jeweller that closed down its London store for Nick to buy an engagement ring for Priyanka, and reportedly the two got engaged on Priyanka’s birthday last month on the 18th.

Her sparkler is said to be a five-carat diamond with a price tag of around $300,000, according to The Hollywood Reporter.

On Friday night, Priyanka, Nick and close family members stepped out for a dinner. Priyanka was seen proudly flaunting the rock as she made her way into a hotel, hand-in-hand with Nick, looking visibly elated.

Priyanka is a former Miss World, who established her space in the Hindi film industry with a slew of impressive projects like “Fashion”, “Mary Kom”, “Barfi!”, “Bajirao Mastani” and “7 Khoon Maaf”. She forayed into the international showbiz world with a singing career, and eventually landed the lead role in American TV show “Quantico”.

It gave her a launchpad that pushed her presence in the global entertainment universe. She made her Hollywood debut with “Baywatch”, followed by “A Kid Like Jake”. She will also be seen in “Isn’t It Romantic?”

Nick is a popular singer and has also acted in “Jumanji: Welcome to the Jungle”, as well as done TV shows like “Hannah Montana”, “Camp Rock” and “Scream Queens”.

The two have been creating a buzz since a joint appearance at the Met Gala red carpet in 2017, leaving everyone wondering whether they were dating.

At the Met Gala, Priyanka had just laughed off a romance with Jonas, insisting they simply shared an agent and were friends. She had also said they went to the Met Gala together as they were both wearing ensembles by Ralph Lauren.

In December last year, Jonas, while promoting “Jumanji: Welcome to the Jungle”, had expressed a desire to visit India.

“I’ve never been (to India), but I’m dying to go and I have now heard from Priyanka, my new friend, a lot about it,” Jonas had told IANS in a statement.
(IANS)