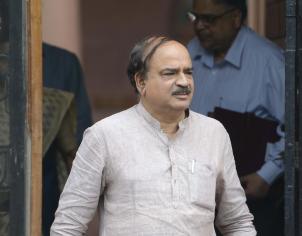 New Delhi: After the triple talaq bill could not be taken up in the Rajya Sabha on Friday, the government blamed Congress President Rahul Gandhi for thwarting passage of the bill, while the Congress accused it of playing politics on every issue.

Attacking the government, the Congress said: “The government plays politics on every issue … it should have built a consensus taking all (parties) along on the bill.”

However, Minister of Parliamentary Affairs Ananth Kumar said even though the bill could not be taken up in the monsoon session, the government would keep on trying to protect the interests of Muslim women.

“We will keep the struggle on to give justice to Muslim women. Congress President Rahul Gandhi and his party are directly responsible for delaying the passage of the bill. They have blocked it from day one. They unnecessarily raised the issue of sending the bill to the select committee,” Kumar told reporters outside the Parliament.

“Our party’s position is absolutely clear on this. I will not say anything on this further,” she said.

“In Lok Sabha, there was absolute consensus when it was passed. Congress and other parties were also part of the discussion there. There was no division there. Then why they are blocking it in Rajya Sabha? This is the double standard of the Congress party … they do something in Lok Sabha and the opposite in Rajya Sabha,” Kumar said, adding this is the true face of the Congress party.

“This is an injustice done to crores of Muslim women. Triple Talaq is a big issue of gender justice. It is a social issue. I would urge the Congress to understand it and pass the bill with a consensus,” Kumar said.

He also said if the Congress party’s intention was right, they should have discussed the issue. “Time was already allotted for it. It has been pending for the last two sessions.”

“Sonia Gandhi, Rahul Gandhi and Congress party don’t want to give protection to the Muslim women. They are just shedding crocodile’s tears, and they will keep betraying (the Muslim women),” said the Minister.

The Muslim Women (Protection of Rights on Marriage) Bill, 2017 has been deferred to the next session of Parliament as the Rajya Sabha decided to not take it up on Friday, the last day of the monsoon session, Chairman M. Venkaiah Naidu announced.

Towards the evening, Union Law Minister Ravi Shankar Prasad insisted that the bill be taken up, but the Chairman said he would not proceed without a consensus on the issue.

Replying to a question on Triple Talaq Bill, Congress spokesperson Pawan Khera said: “This government plays politics on every issue. They have always done poor politics on everything. If a few of their bills are not getting passed, then it was the responsibility of the government to find a way and build a consensus taking all (parties) along. Don’t do politics.”

“If you are really committed about any cause, then you should work for it. If they don’t have commitment, they will keep doing politics and their true face will be exposed,” he added.
(IANS)