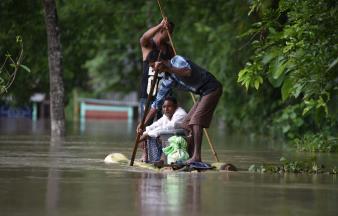 Guwahati: Close to 90,000 people have been hit in Assam as a second wave of floods ravaged the state, affecting 153 villages in six districts including Dhemaji, Lakhimpur, Darrang, Golaghat, Sivsagar and Charaideo.

The Assam State Disaster Management Authority (ASDMA) said the floods that have hit the state since June 13 have affected 10.99 lakh people. The state has registered 41 deaths — 38 in flooding and 3 due to landslides.

He has asked the Revenue and Disaster Management department to come up with innovative steps like constructing high-rise structure to give succour to the people who suffer from perennial floods every year.

Altogether 388 relief camps have been set up and 440 relief distribution centres have been opened to distribute relief items to the affected people.
(IANS)