Is Article 35A unconstitutional? SC to hear plea 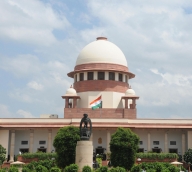 New Delhi: The Supreme Court on Monday refused to hear the challenge to Article 35A in the absence of a judge of a three-judge bench that was hearing the case and directed the next hearing in the week commencing from August 27.

It also said that on its next hearing it will decide whether the matter should be referred to a five-judge Constitution Bench.

As some lawyers insisted on the hearing, a bench of Chief Justice Dipak Misra and Justice A.M. Khanwilkar said as the matter was being heard by a three-judge bench also comprising of Justice D.Y. Chandrachud, and since the later was not available, it could not be heard.

“Let these matters be listed in the week commencing August 27 to test the preliminary arguments of the petitioner,” said a brief order passed by the court.

“Article 35A is in vogue for the last 60 years and we will only see whether it is violative of the basic structure of the Constitution,” said Chief Justice Misra as he refused the plea for an early hearing.

Attorney General K.K. Venugopal told the court that with elections to 6,000 Panchayats to be held in September, “it was not an opportune time to hold the hearing”.

Venugopal also told the court that the interlocutors were also talking to the state government.

As the court directed the listing of the matter from the week starting on August 27, Additional Solicitor General Tushar Mehta, appearing for the Jammu and Kashmir government, said: “We reserve the right to seek adjournment on the grounds cited in the letter to the court.”

The top court had on May 1 sought the Central and Jammu and Kashmir governments’ response on a plea seeking declaration that the Constitution’s Article 35A was unconstitutional as it deprived generations of outside settlers in the state their right to property and employment under the state government.

The petitioners have contended that the President could not have amended Article 35 by incorporating Article 35A through a presidential notification.

Article 35A bars all, other than the original inhabitants of the state, from owning immovable property, settling, getting jobs under the state government or availing state scholarship.
(IANS)

Nooyi to quit as PepsiCo CEO; will remain Chairman till early 2019