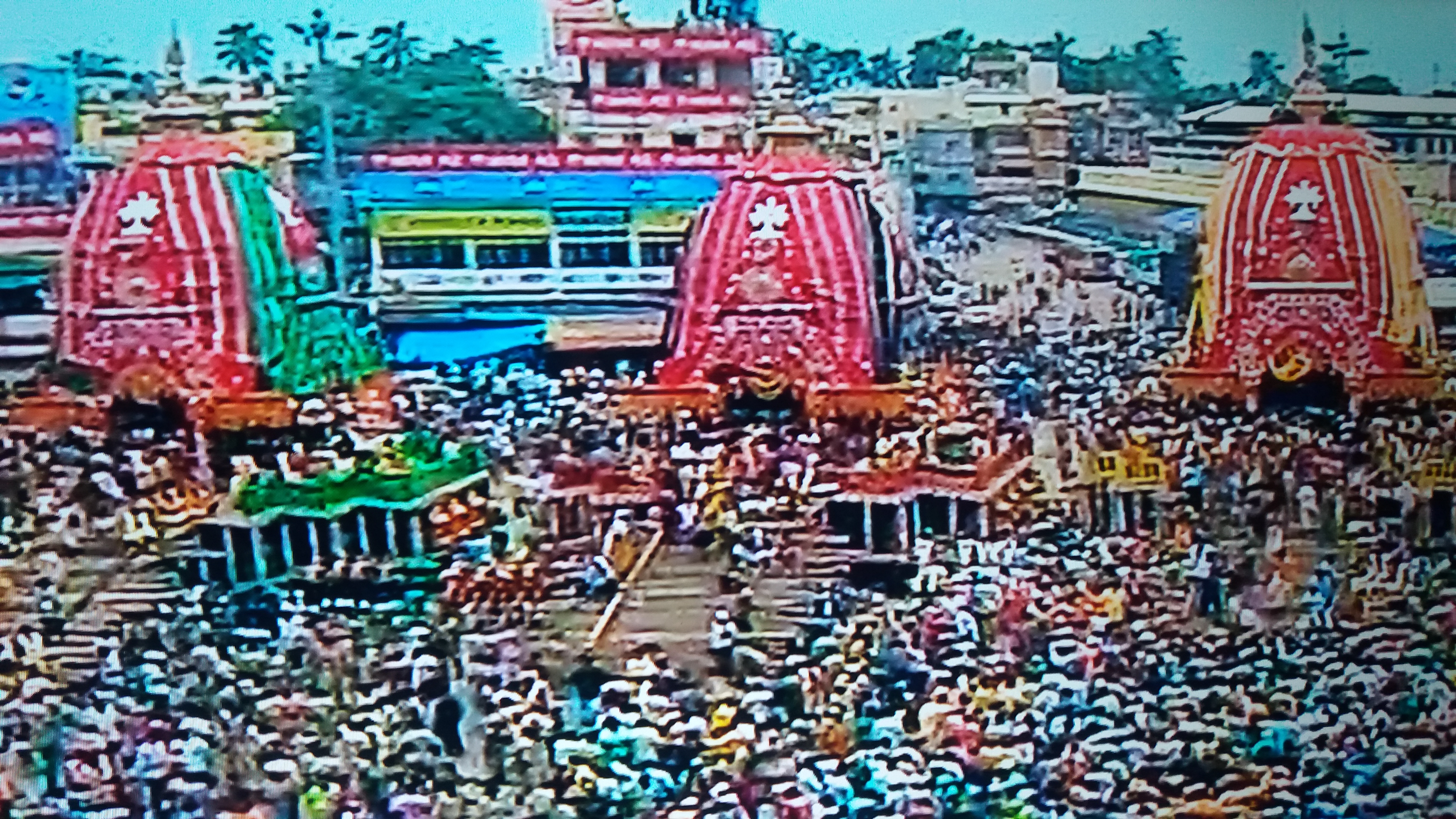 New Delhi: Lord Jagannath’s Rath Yatra or Car Festival is Odisha’s most well known festival which is celebrated in many parts of the world today.

The uniqueness of the festival, according to devotees, lies in the fact that Jagannath whose name itself suggests Lord of the Universe happily comes and mingles with his devotees.

There is virtually no restrictions, no bar as the mass of devotees belonging to all class, religion, caste and creed can come close , see , touch and be with the Lord. A time ecstasy and of togetherness , a time of happiness and fulfillment.

Interestingly the three deities Lord Jagannath,his elder brother Lord Balabhadra and their sister Devi Subhadra ensconced at Puri temple are without limbs demonstrating that they are totally dependent on the devotees for any movement.
This is extremely symbolic ceremony that the Lord who is the real mover of the Universe is dependent on his devotees. It is the devotees who gladly carry Him around even though realizing fully well that the whole Universe is actually moving due to His power. There is a special bond of love and trust between God and his devotee.If devotees are solely dependent on God and He is their only hope , God too longs for their love and affection . It’s a two way process and Rath Yatra clearly demonstrates that.

Lakhs of devotees descend on the pilgrimage town of Puri in eastern state of Odisha situated on the Bay of Bengal to participate in the Rath Yatra.

Puri alongwith Badrinath,Dwarka,Rameswaram are among the four dhams or pilgrimage sites revered by the all Vaishnavite Hindus in India with the belief that a visit to the dhams results in one achieving salvation.
The word dham actually means ‘abode’ . All these places are supposed to be where the Lord resides, Lord Krishna (at Dwarka) Lord Ram (Rameswaram)Lord Vishnu (Badrinath) or Lord Jagannath (Puri).

The Jagannath Temple at Puri is huge temple complex where the presiding deities are Lord Jagannarth,his elder brother Lord Balabhadra and their sister Devi Subhadra.

Hundreds of sevayats perform different rituals related to the deities. These are hereditary positions and have continued for several generations. Today there are more that 250 categories of sevayats looking after the multifarious duties and rituals connected with the deities.Traditionally the first sevayat of Lord Jagannath is Gajapati, the king of Puri. The present king of Puri is Gajapati Maharaja Dibyasingha Deb.

Before the chariots are moved the King of Puri for generations as the first sevayate sweeps the floor of the chariot with a gold broom.The ritual is known as “Chera Pahara”. It also symbolizes that no job is too lowly to done by anyone even though he may be a King and also that in front of Lord Jagannath , every one is equal and the King may have to do the work of sweeping.

Interestingly all the three colorfully decorated deities with face of Lord Jagannath black, Lord Balabhadra white and Devi Subhadra turmeric yellow, are made of wood.

With huge round wide open eyes and square face Lord Jagannath looks like a tribal deity.

According to legend Lord Jagannath was the tribal God of Savara tribals living in forest. The Savaras knew Lord Jagannath as Neelmadhav. King Indradyumna ruler of Avanti hearing of the God being amongst the tribal people sent his priest Vidyapati to the chief of Savaras called Viswavasu. Vidyapati stayed with the tribal chief and eventually married his daughter Lalita.

However when Indradyumna went to see the Lord Neelmadhav he had disappeared. Indradyumna was crestfallen but was consoled by assurances that God will appear in shape of a log of wood in four fold images. He saw Lord Neemadhav in a dream and soon a wooden log with four branches was found floating in the sea.

Divine proclamation was heard that Lord Jagannath will make his own image and therefore an old carpenter who was at the gates (actually divine architect Vishwakarma) be allowed to enter the temple and the doors should not be opened till the construction was complete. As no sound was heard from inside curiosity led the Queen to get the door opened much before the time. The old carpenter had disappeared leaving behind three unfinished idols with no hands no feet no ears and no eyelids.

Eventually it was the unfinished idols which were installed in the newly built Jagannath temple and continue to be worshipped till today.
Today’s temple was built by the first ruler of Ganga dynasty Chodagangadeva in the 12th century A.D.

The Ratha Yatra is the annual ceremonial procession is held on the 2nd day of the bright fortnight of the month of Ashad called Ashad Shukla Dwitiya in which the deities go to visit Gundicha temple supposedly of their aunt. The Gundicha temple known as the Garden House of Lord Jagannath is situated about 3 kilometres away from the main Jagannath temple.

Both temples are actually at two ends of the Bada Danda or grand avenue through which the Ratha Yatra procession takes place..

After nine days stay they return and the returning process of Ratha Yatra to the Puri Jagannath temple is called as Bahuda Yatra.
The chariots of the deities are newly built every year. Jagannath’s chariot is called Nandighosa, the chariot of Balabhadra is called Taladhwaja and that of Subhadra is called Dwarpadalana.

The ropes of the huge chariots are pulled by millions of devotees chanting the holy mantras and devotional songs. Some devotees are dressed in images of Hindu gods, others perform Odissi dance in front of the chariots.
In earlier days many devotees used to throw themselves before the wheels and get crushed in the belief that they will achieve moksha.

Most devotees would just want to touch the chariot or even ropes pulling the chariot to be be blessed by the God.
(India News Stream network)