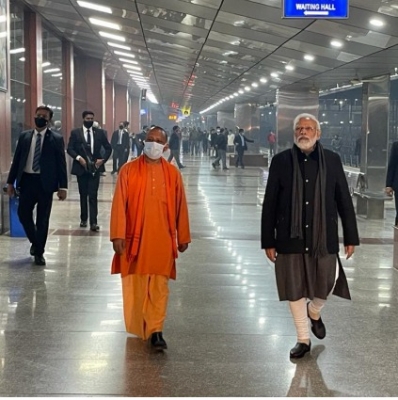 Taking to Twitter early Tuesday morning, the Prime Minister said: “Next stop…Banaras station. We are working to enhance rail connectivity as well as ensure clean, modern and passenger-friendly railway stations Inspecting key development works in Kashi. It is our endeavour to create best possible infrastructure for this sacred city.”

The Prime Minister also held a meeting with Chief Ministers that went on till late Monday night.

Assam Chief Minister Himanta Biswa Sarma, who attended the meeting, informed that the meet went on for six hours, and said in a tweet: “Thank you Narendra Modi Ji for enlightening us with your words of wisdom and vision for a better India during the 6 hr long exhaustive and intense deliberation.”

Manipur Chief Minister N Biren Singh Singh tweeted” “Thank PM Narendra Modi ji for your valuable guidance and suggestions for a united strong India. We really admire of your energy and passion to take the country into newer heights. Even after many hectic engagements including the six hours long meeting, you are not taking rest,”

The conclave will provide an opportunity to share governance-related best practices and is in line with the Prime Minister’s vision of furthering team India spirit. IANS

Active Covid cases in UP reach 155