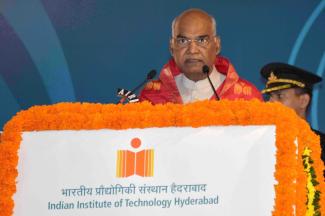 Hyderabad: President Ram Nath Kovind on Sunday said that the best scientific universities and institutions of learning are not just teaching shops or degree factories but increasingly they are sources of innovation and incubators of technology and technology-driven start-ups.

He was speaking at the seventh convocation of the Indian Institute of Technology (IIT) Hyderabad at Kandi in Sangareddy district near here.

“The knowledge ecosystem of public investments in science, academic institutions and universities, research laboratories, commercial applications and private enterprise has an almost magical potential. Its best example is, of course, Silicon Valley in the US. At the core of Silicon Valley are basic science and technology campuses and their talented faculty and students,” he said.

The President advised IIT Hyderabad to remain relevant to the fourth industrial revolution that he said will write the script of the 21st century. He said that as a second generation IIT, it should borrow from as well as learn from the models of the past.

Kovind was happy to note that IIT Hyderabad had made a start by setting up a network of centres for research and promotion of entrepreneurship.

The President said that IIT Hyderabad had been set up in a city and in a metropolitan area where several elements for knowledge ecosystem already exist. Hyderabad had a long tradition of scientific discovery and application, he added.

The President said that individually, many of these entities were doing excellent work but there was a need for cross-pollination.

“IIT Hyderabad is not envisaged as just an add-on to this ecosystem. Rather, it needs to be the hub of this ecosystem. It must be the connecting tissue and the catalyst for a greater synergy.”

Humans can be emotionally manipulated by robots: Study