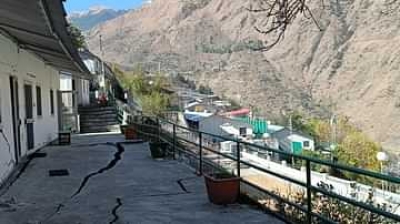 New Delhi: Amid the reports of major land subsidence in Joshimath in Uttarakhand causing massive damage, government data has disclosed that a total 3782 instances of major landslides occurred in various parts of the country between 2015 to 2022 which have impacted lives and infrastructure.

While the authorities talk about following proper procedures in setting up a project in vulnerable regions and also in carrying out post-disaster assessment, experts have time and again raised the issues of a lacklustre approach in dealing with such significant issues of environmental and ecological concern.

As per the government, from the post disaster investigations of the landslides it was revealed that the major trigger for landslides was unprecedented high rainfall. The other important geo-factors such as terrain character, slope forming material, geomorphology, land use or land cover in different terrain are the preparatory factors for initiation of landslides. Moreover, anthropogenic causes such as unprotected slope cuts, blocking of drainage etc have also been reported in many of the slides.

However, environmentalist Himanshu Thakkar, coordinator at South Asia Network on Dams, Rivers and People, pointed to flaws in the process of carrying out an Environment Impact Assessment (EIA). “There has been no proper assessment of a project’s impact on the environment and vulnerability of the area. Similarly, there is no proper system of assessment that how the project is going to perform in such cases of vulnerabilities. I have written on these issues to the concerned authorities, but, nothing substantial has happened.”

Similarly, we have failed in technical clearance. There should be cumulative impact assessment. “There is no concrete post disaster assessment even in case of major landslides. That, how it happened, how agencies performed and how it could be improved�.such crucial exercises are not carried in proper manner, this did not happen properly even in major landslides of Kedarnath and Chamoli,” he added.

According to the National Disaster Management Authority (NDMA), landslides and avalanches are among the major hydro-geological hazards that affect large parts of India besides the Himalayas, the Northeastern hill ranges, the Western Ghats, the Nilgiris, the Eastern Ghats and the Vindhyas, in that order, covering about 15 % of the landmass.

Officials said that the Northeastern region is badly affected by landslide problems of a bewildering variety. Landslides in the Darjeeling district of West Bengal as also those in Sikkim, Mizoram, Tripura, Meghalaya, Assam, Nagaland and Arunachal Pradesh pose chronic problems, causing recurring economic losses worth billions of rupees. A different variety of landslides, characterized by a lateritic cap, pose a constant threat to the Western Ghats in the South, along the steep slopes overlooking the Konkan coast besides the Nilgiris, which is highly landslide prone.

According to government information, the Geological Survey of India in collaboration with the British Geological Survey (BGS) under the National Environmental Research Council (NERC), UK funded, multi-consortium LANDSLIP project has developed a prototype regional Landslide Early Warning System (LEWS) for India, and the same is currently being evaluated and tested by the GSI in two pilot areas in India at Darjeeling district, West Bengal and the Nilgiris district, Tamil Nadu. A similar testing procedure has also been extended to Kalimpong district in West Bengal.
IANS

New Delhi, Dec 28 (IANS) Taking a tough stand against pollution arising out of emissions from heavily polluting fuels from various industrial, commercial and other miscellaneous applications, the Commission for...