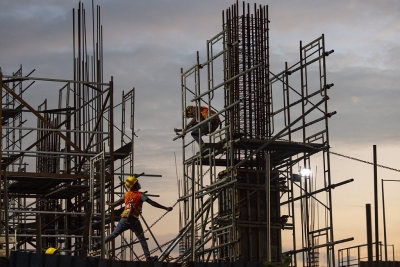 New Delhi: While some commendable staps are being taken in the country for affordable housing, but often houses built under such projects fail to comply with energy efficiency, and eco-friendly norms. They have been found lacking on counts of daylighting, ventilation and heat gain.

Some of such shortcomings were found during a study of the Dignity Housing Scheme in Telangana.

As regrds ventilation, it was found that 60 per cent of buildings in targeted projects were either in wind shadow areas not receiving adequate air exchange while others were too windy. The study carried out by CSE recommended that buildings should be staggrerred and oriented in a way that they align with favourable wind direction. This can reduce wind shadow area and the tunnel effect.

The researchers also found that most buildings could not comply with the requirements of heat gain through walls as prescribed in Eco Samhita: While several building blocks could adhere to the requirements of window opening and window to wall ratio that are important for day lighting and ventilation, they could not meet the heat gain requirements leading to more thermally uncomfortable hours in the buildings.

The upper limit for heat gain through walls prescribed as per ECBC-R is 15 watts /sq.m. , but the actual gain could be as high as 22.7 w/sq.m – 1.4 times higher. This can force the inhabitants of such houses to increase their dependence on energy intense mechanical cooling.

It was found that in one building cluster the east-west facing façade had upto 17 per cent extra heat gain compared to the same building facing North-South. When the same building design was simulated by changing the material from concrete blocks to fly ash with lesser heat gain potential, the heat gain dropped by about 40 per cent. Thermal comfort increases even further when shading devices are combined with the walling material in the building envelope. If layouts are constrained or have site limitations insulation may be used in exterior walls. But this can increase cost.

Daylighting and ventilation can be affected if layout plans of building clusters are lacking in good planning: Existing energy efficiency regulations have laid down minimum threshold for day lit areas and ventilation in buildings. According to CSE, even if these requirements are met by individual buildings, the overall cluster plan can impede its effectiveness.

It was found that a building block that is compliant with the relevant rules on its own was capable of having 38 per cent daylit area. But in a cluster form of mass housing effectiveness of this could reduce drastically to a mere 7 per cent especially in lower floors. Daylit areas in middle floors could not reach compliance threshold of 25 per cent as per the NBC 2016. Blocks with a central courtyard performed better than linear blocks as there is light ingress from two sides. Lower floors in high rise buildings have poor daylight ingress. Top floors have sufficient daylit area. Thus, building clustering and distance between buildings require attention in the layout.

The study laid special stress on ventilation in view of the prevailing pandemic. The form, height, distance between buildings, clustering, and placement of blocks on the site are some of the factors that affect ventilation. The study found that 60 per cent of buildings in targeted projects were either in wind shadow areas not receiving adequate air exchange while others were too windy. It is therefore necessary to stagger buildings and orient them in a way that they align with favourable wind direction. This can reduce wind shadow area and the tunnel effectThe

CSE experts also cautioned against indiscriminate use of new generation material, as it has been seen that drven by the need to fast track construction, the construction industry is increasingly opting for new generation material like pre-cast concrete wall panel, extruded polysterene core panel etc. Even though these cost more, they are still favoured as these allow to reduce labour cost and time cost. But without insulation and shading they can create heat intensive structures.

The study has recommended amending bylaws and Master Plans and creating an oversight system for implementation of appropriate building design, material, layout plan to improve day lighting, ventilation and reducing heat load in buildings. It said layout/site plan of building clusters should be integrated to enhance thermal comfort parameters.

The experts also laid emphasis on building knowledge, skill and capacity on climate-appropriate design, materials, and associated tools and techniques to enable the transition.

India should chart its own economic path : Dr Raghuram Rajan