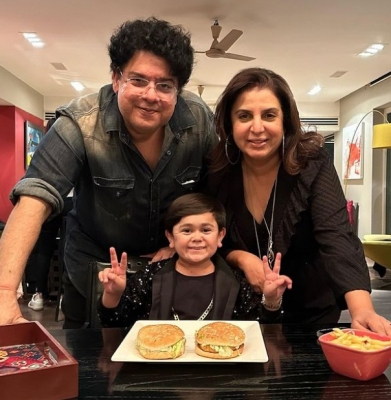 Farah shared pictures on Instagram, where Abdu can be seen with burgers. While Abdu is seen in a shiny black jacket at Farah’s home, Sajid is seen in casuals.

“My 2 favourites this season of #biggboss16 sometimes its even better to just win hearts @abdu_rozik @aslisajidkhan @colorstv #mandli #family #burgir,” she wrote as the caption.

Abdu exited the show for the final time as he had a prior work commitment. Sajid also walked out of the house in the latest episode as he shared that his contract has ended.

In the show, Sajid revealed that he will begin shooting for his films after four years. He was accused of sexual harassment by several women.

Sajid also revealed that the next film is titled ‘100 Percent’, which stars John Abraham and Riteish Deshmukh. Tagged as a story of “love, marriage, family and spies”, the movie is produced by T-Series head Bhushan Kumar and Amar Butala.

Hansal Mehta’s ‘Faraaz’ trailer is all about hope and courage

Why SKY is important for Team India in the 50-over WC year?