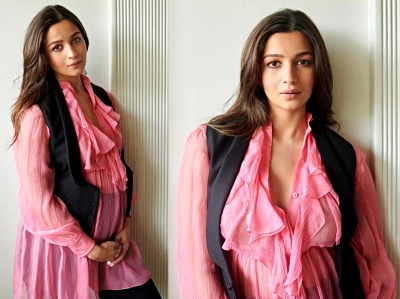 Mumbai, Aug 27 (IANS) Bollywood actress Alia Bhatt, who is awaiting the release of Ayan Mukherjee’s epic film ‘Brahmastra’, recently shared a few pictures on her social media where she can be seen flaunting her baby bump.

Alia is in her second trimester and the pregnancy glow on her face is evident.

Taking to Instagram, Alia posted two pictures of herself. The pictures show her wearing a black vest over a sheer pink top as she paired them with black leggings. She cradled her baby bump with both of her hands as she looked at the camera in the first picture.

Soon after she posted the pictures, Alia received a lot of compliments for them. Kareena Kapoor’s sister-in-law Saba Ali Khan called Alia “stunning”, while Kareena, whom Alia looks up to, wrote in the comments section: “Uffffff owning it and howwwww. Love youuu.”

Alia, who tied the knot with Ranbir on April 14 this year, announced on June 27 that she was expecting their first child. Sharing pictures from a sonogram session, she wrote: “Our baby … coming soon.” – IANS