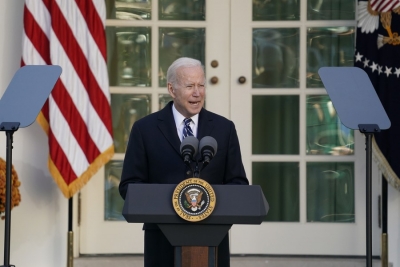 Washington: US President Joe Biden announced that his administration will release 1 million barrels of oil per day for the next six months from its strategic reserve in an effort to tame the elevated gas prices.

The authorisation of releasing over 180 million barrels from the US Strategic Petroleum Reserve is the “largest” release from national reserve in the country’s history, Biden said in a speech from the Eisenhower Executive Office Building on Thursday.

The latest move came weeks after the US and other major oil-consuming nations announced in early March that they would release 60 million barrels from their emergency stockpiles.

The President proposed a “use it or lose it” policy, which makes companies pay fees on wells on federal leases they haven’t used in years and acres of public land they’re hoarding without production.

“Look, the action I’m calling for will make a real difference over time. But the truth is it takes months, not days, for companies to increase production,” he said on Thursday.

In his address, Biden also highlighted the importance of US energy independence and called for a transition to clean energy.

“Ultimately, we and the whole world need to reduce our dependence on fossil fuels altogether. We need to choose long-term security over energy and climate vulnerability,” he said.

Biden, who faces with mounting pressure to address a surging inflation ahead of the midterm elections, blamed the Covid-19 pandemic and Russia’s military action for rising gas prices.

“As Russian oil comes off the global market, supply of oil drops and prices are rising,” he said, acknowledging the US energy embargo on Russia would “come with a cost”.IANS

New Delhi: The union cabinet on Wednesday cleared the government's ambitious National Green Hydrogen Mission with an outlay of Rs 19,744 crore. It aims to make India a global hub...

. OPEC oil cartel and its allies, including Russia may consider biggest cut . Oil prices shot up by as much as 4 per cent on Monday .OPEC+, controls more...

Gandhinagar: The state Assembly on Wednesday unanimously withdrew the Gujarat Cattle Control (Keeping and Moving)In Urban Areas bill (GCCUA) which was aimed at controlling the movement of stray cattle from...