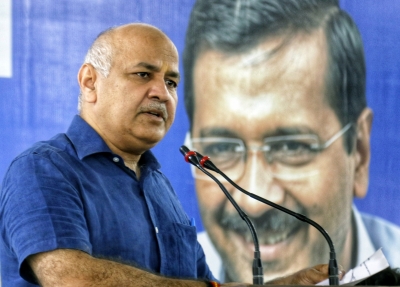 Sisodia along with other party workers is demonstrating against Bharatiya Janata Party outside the Election Commission office, raising slogans and seeking action against BJP.

Talking to media, Sisodia said that this is probably for the first time in the history that a candidate has been kidnapped. Later candidate is being pressurised to withdrew the nomination. He said that the Election Commission should take it very seriously and should take action immediately.

He said, “I was given the appointment to meet EC later in the day after noon, but this is an emergency situation and so we have to come to meet EC this time only.” He alleged that AAP’s candidate has to withdrew the nomination at the gun-point together with police and BJP goons and later the police left him among BJP goons.

“Watch how police and BJP goons together – dragged our Surat East candidate Kanchan Jariwala to the RO office, forcing him to withdraw his nomination. The term ‘free and fair election’ has become a joke!”, tweeted AAP leader Raghav Chaddha sharing a video.

Earlier in morning, Sisodia had alleged, “The BJP is losing badly in this election in Gujarat and so the party has got fumed. BJP has kidnapped Aam Aadmi Party candidate. AAP’s Surat East candidate Kanchan Jariwala has been kidnapped”.

“On the support of goons and police, candidates are being abducted and their nominations are being withdrawn. This type of public hooliganism has never been seen in India. Then what is the point of elections, then democracy is over,” tweeted Delhi Chief Miniter Arvind Kejriwal.

New Delhi:As the winter approaches, a layer of smog continued to envelope the national capital on Monday with the overall AQI registered at 313 under the "very poor" category. According...

New Delhi,: Ahead of the MCD polls on December 4, Bharatiya Janata Party's Delhi chief Adesh Gupta has said that if the party wins the elections, a policy will be...

New Delhi: The Aam Aadmi party on Friday filed a complaint with the state election commission against BJP MP Manoj Tiwari and other leaders in connection with the alleged death threats...