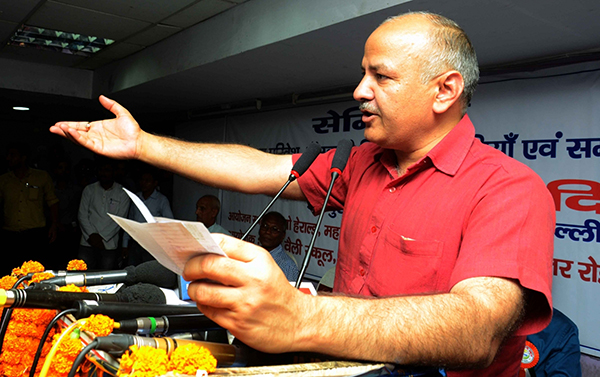 New Delhi: Deputy Chief Minister of Delhi Manish Sisodia on Friday wrote to Union Home Minister Amit Shah urging him to intervene to stop what he called the BJP bulldozer destroying himomes of over 60 lakh Delhiite.

Addressing a press conference on Friday, Sisodia said, “Through its ‘Bulldozer Politics,’ the BJP is planning to evict 63 lakh people from their homes in Delhi. MCD has issued notices to 50 lakh individuals living in 1750 illegal colonies and 10 lakh people living in 860 slum areas and Jhuggi-Jhopri Clusters on the BJP’s orders.”

”The Centre must intervene and protect Delhiites from the havoc BJP is causing. The BJP has pledged to destroy Delhi in the name of Bulldozer Justice and BJP leaders are playing petty politics to extort money from the public and gain political mileage,” He said.
The Deputy Chief Minister added, “The BJP intends to bulldoze every house in these colonies. In addition, the BJP-led MCD has sent summons to 3 lakh persons across the city who have made even minor changes to their homes’ structure. This plot would result in India’s worst calamity in history, with over 60 lakh people being homeless as a result of the BJP’s bulldozer tactics in Delhi. There will be widespread outrage.” He went on to say that if 70% of Delhi’s population becomes homeless all at once, there will be no greater damage in India’s history.

He added, “The Kejriwal government is vehemently opposed to any politics that threatens to devastate the nation’s capital. Although the BJP’s term in MCD has come to an end, the party continues to move around the city with bulldozers demolishing houses and performing recovery work.” He continued, “Over the years, the BJP has enabled these colonies to prosper, make money, and now it is demolishing them.”

He urged Home Minister Amit Shah to take tough measures against the BJP’s actions in Delhi, which he said are harming the lives of ordinary people. “In the last 17 years, BJP leaders and MCD officials have furiously sanctioned unauthorised buildings across Delhi, made a lot of money, and are now displacing people under the pretence of Bulldozer politics. Action should be taken against such leaders and officials, not the public. First, their dwellings should be bulldozed.”

After poll time diatribe, Yogi for first time invites Bangladesh to invest in UP