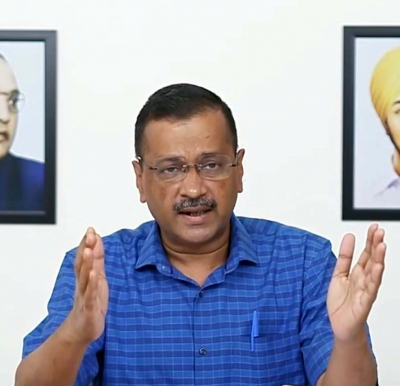 Rajkot (Gujarat): Delhi Chief Minister Arvind Kejriwal has claimed that an Intelligence Bureau ( IB) report has suggested that the Aam Aadmi Party will form the government in Gujarat with a thin margin.

But, he said that he wished to have a thumping majority, and so appealed to the voters to vote for the AAP in large numbers.

Addressing the mediapersons in Rajkot on Sunday, Kejriwal said, “According to sources, IB report says if the elections are held today, AAP will form government in Gujarat with thin margin. We are ahead of the BJP with a very few seats, the people of Gujarat have to give a big push to the AAP so that the AAP has a good majority and a government is formed with a good majority.”

He also claimed that since the report was made available to the government, “the BJP and the Congress have joined hands, group meetings are going on, the BJP is badly frightened with the report. Both party leaders had secret meetings and later both are making allegations at the AAP in the same language.”

New Delhi: The Delhi High Court on Tuesday allowed an eight-month pregnant woman to undergo medical termination of pregnancy. In her petition, the 26-year-old woman had mentioned that a cerebral abnormality...