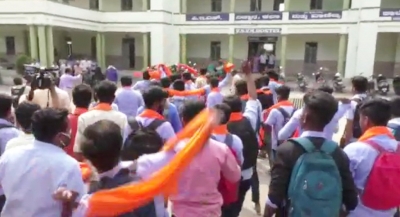 According to a statement issued by the MoFA, the Charge d’ Affaires was urged to convey Pakistan’s “extreme concern” to the government of India over the “anti-hijab campaign being spearheaded by RSS-BJP combine in Karnataka, which is part of its larger exclusionist and majoritarian agenda aimed at dehumanising and demonising Muslim women”, the report said.

The Indian diplomat was further told that “religious intolerance, negative stereotyping, stigmatisation, and discrimination against Muslims continue unabated even after almost two years of the horrific Delhi riots which claimed the lives of 50 innocent Muslims in February 2020”, Geo News quoted the Ministry statement as further saying.

It was also emphasised that the Indian government “must fulfil its responsibility to take action against the perpetrators of harassment against women in Karnataka and take adequate measures to ensure the safety, security, and well-being of Muslim women”. (IANS)

BJP not only ‘distorted’ history but ‘destroyed’ Hinduism too: Mamata