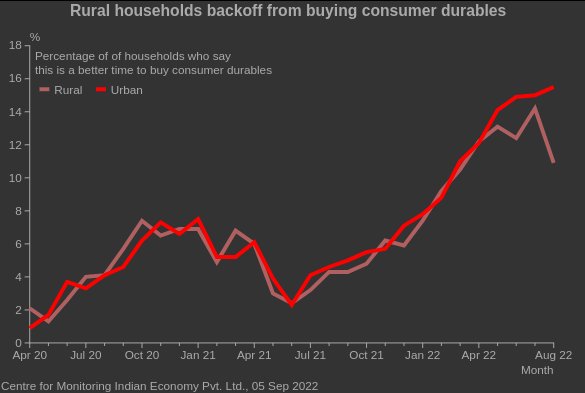 With the population growing, each year new seekers enter the job market. But the scope of work is not expanding in rural areas, and people are not spending enough to hire additional laborer’s. Erratic monsoon has stood in the way of growth in crop production, and so the scope of agricultural-related (marketing, transporting and so on) jobs are not expanding either. Consequently, rural people’s spending power is shrinking, and rural distress is piling up with a cascading effect.

In October, rural unemployment in India stood at 7.7 per cent, reversing the decline seen in September, when it had dropped to 6.43 per cent, the lowest in four years.

According to the data published by the Centre for Monitoring Indian Economy, the rural unemployment rate was 8.04 per cent in October, and in the first week of November it has risen to 8.68 percent (while urban unemployment rate is at 7.87 percent). The trend indicates it may stay above 8 per cent throughout November. It was 5.84 per cent in September.

However, the first week’s trend may get reversed later. For October, the weekly figures varied from 6.37 to 9.42. However, to reverse the trend, the rural economy needs some boost that will generate more income. One such instrument can be MGNREGA, if it is free from corruption and directed towards asset creation. However, the union government is not inclined to spend more on this count.

The rising unemployment  can be attributed to various factors. The erratic rainfall affecting the sowing activities can be one of the reasons for such increase in unemployment in rural India. If crop production is affected, consequentially related service sector will be hit. This time summer crops were badly affected and the unemployment rate in rural India rose from 6.1 per cent in July to 7.7 per cent in August. During this period, the employment rate fell from 37.6 per cent to 37.3 percent.

Significantly, according to the CMIE data, the unemployment rate during August was the highest in Haryana at 37.3 per cent followed by Jammu and Kashmir at 32.8 per cent, Rajasthan at 31.4 per cent, Jharkhand at 17.3 per cent and Tripura at 16.3 per cent. Except for Tripura, which is a tiny state, the drier regions were hit more. It only confirms the vagaries of nature due to climate change have started affecting India.

To counter this, we need to encourage sowing and consumption of maize and other hardy crops that need much less water content. Though India’s agriculture ministry is studying, and therefore is aware of, the effects of climate change—which will affect the cultivation of paddy and wheat the most over the next few decades—there is no concerted attempt by the governments, either union or the state governments, towards this direction through MSP and other measures.

The daily wage labourer segment is the most hit as, according to CMIE, it shrunk by nearly 15 million. It means the employment opportunities in rural India during October ‘were highly constrained’. Are the rural MSMEs also being affected now as the global economy is heading towards recession? The figures will come later and the situation will be understood better then.

It has been long argued that a three dimensional approach is needed to counter the problem of unemployment in rural areas: providing quality skill-based education in schools  instead of following a syllabus that cannot offer to skill up the students for the industrial needs; augmenting  massive growth of agriculture-based industries by offering  incentives like interest free loans; and allowing the growth of scope of self-employment through diversification of small and cottage industries by providing financial help, raw materials and technical training.

However , the successive governments have failed to implement these three-pronged strategies with due importance, and with climate change now starting to affect our rural areas, things are getting more complicated.

Meanwhile, urban India recorded an increase of 2.26 million salaried jobs, pushing the quantum of total number of such jobs to above  51 million. According to CMIE, this is ‘the highest level in the past 44 months’. However, the think tank cautioned that ‘urban India is much smaller than rural India and therefore its gains cannot entirely offset the losses in rural India’.