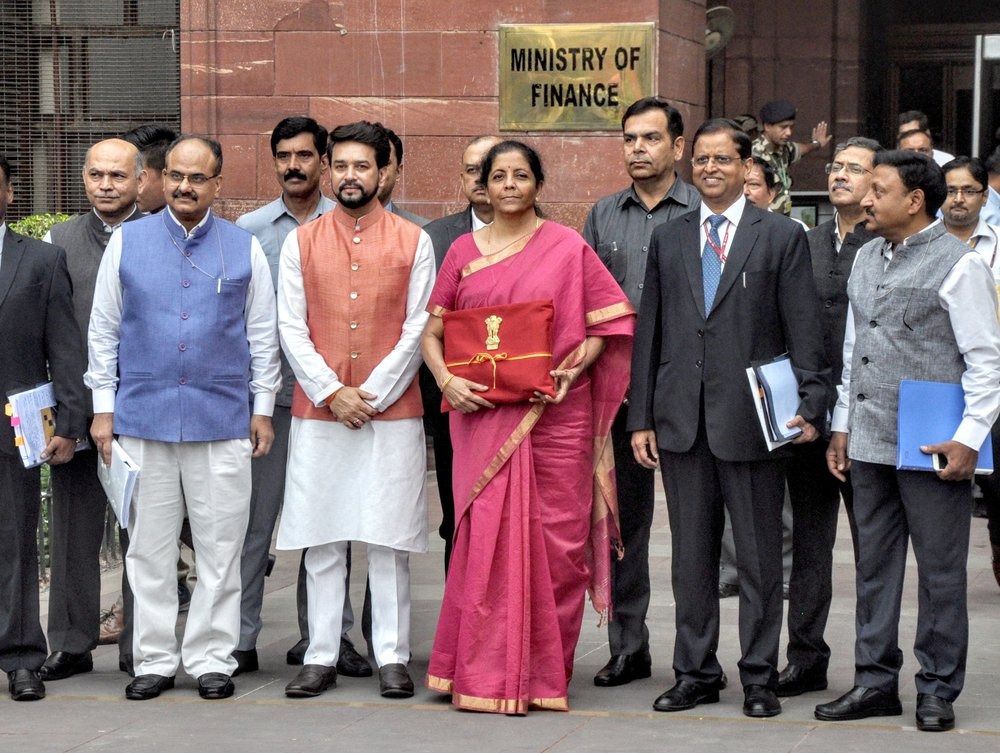 New Delhi: The Modi-led NDA-II’s budget has changed the focus to peg India’s finances on village and farms, clearly a visible shift from the Nehruvian economy of promoting large public sector
entities.

In its place the Modi 2.0 Government wants the private sector to be a driver in infrastructure or overall economy. This is aimed at building a larger $3 trillion economy in the immediate
future and $5 trillion in the course of time. Finance Minister Nirmala Sitharaman asserted, “In purchasing power parity, we are in fact, the third largest economy already, next to China
and the US”.

Certainly, this sounds good as Sitharaman’s Rs 27.86 lakh crores budget has interesting features. Besides, it is ambitious and spread widely.

Her positive is looking for the soul of India, which she says, “lives in its villages”. So the economy is planned to get a boost with empowerment of villagers, women and farmers. It sees farms and increasing rural income as the pivot.

The Scheme for Upgradation and Regeneration of Traditional Industries (SURTI) will create 100 clusters for 50,000 artisans. The ASPIRE for promotion of technology business
incubators (TBI) in rural industry proposes another 100 clusters to develop 75,000 skilled entrepreneurs in the agro-rural industry sectors.

This is in addition to 10,000 new farmer producer organsations (FPO), apparently with corporate interface, to ensure economies of scale for farmers over the next five years.

The Prime Minister’s Digital Saksharata, Jal Shakti in 256 districts, e-nam, APMC, Swachha Bharat for rural solid waste management are designed to spur rural growth. Many of these would be a bridge between urban and rural growth and are backed by many programmes for the industry. This is likely to create demand and spur growth of industry
and allied sectors.

Fine. But the Finance Minister has thrown a spanner. Her proposal to levy additional excise duty, road and other cess of Rs 2.50 on petrol and diesel will be inflationary as it would

shoot up transport expenses at all levels. Truck, bus and other transport fares will shoot up. This may thaw the economy.

Already cess and duties are high on fuel and tolls are at atrocious rates. This calls for a relook and withdrawal of the proposal to keep the economy on track.

Another act is the raising of customs duty on gold, already high at 10% it has now been increased to 12.5%. Presumably, gold is mistakenly considered an item of consumption by the rich. But no marriage in a poor or rural household is complete without purchasing gold.

This apart, those suggesting such levies forget that NDA-I of Atal Behari Vajpayee had taken the prudent decision of having zero duty on gold import to stop smuggling. Higher duties are happy indicators for the smugglers, who have links with international gun runners, drug syndicates and terrorist organisations.

Though the aim is to raise revenue, it might end up increasing surveillance at multiple sectors causing a revenue loss. Ideally, this needs to be rolled back as the losses outweigh gains.

Similarly, TDS on cash withdrawals of over Rs 1 crore, not a large sum for even small businesses might cause a slowdown. The Government should not be in a hurry to digitalise the economy as cash is the fastest transaction method. Linking it to black money, simply meaning untaxed is a misnomer.

Let the cash lubricate and speed up the economy. Digitalisation would be a normal an automatic process. Also, there are apprehensions for digitalization too as many Aadhar- linked accounts are stated to have been defrauded. The Government needs to go slow and withdraw such strange rules that make dealings and tax filing cumbersome.

It was expected that the Finance Minister would say some words on abolishing income-tax. Instead increasing rates to 47% for an income over Rs 5 crores does not bode well. Undoubtedly, high taxes reduce disposable income and are a dampener for the people to consume. Sitharaman still has time to review this.

The Indian economy needs simplicity in tax administration. The more of rigmarole there is more the complication for the economy. The NDA-I had started on a good note. The FM
should continue that.

Additionally, those who have been let off up to Rs 5 lakh income should be allowed not to file tax returns. This only burdens the tax office with more clutter and little benefit.

Another correction in the system should be to allow taxes, as of now, to be calculated at Rs 5 lakh instead of forcing those who earn a rupee above it to pay from the base rate of Rs 2.5 lakh. This is a dichotomy and is not a good sign for tax administration. This drains a taxpayer of a huge sum to feed an oversized Government at the cost of comfort to the
economy.

Pertinently, the sooner, the Finance Minister does this, would be better for all — taxpayers, tax administrators and the market.

Politically too it would soothe voters, who have in Sitharaman’s opening paragraph, “overwhelmingly supported the Modi Government of putting the nation first”. A small gift
would have larger dividend.

Moreover, taxing bank deposits does not suit the welfare nature of the Modi Government. It might give small revenues but it causes immense hardship to those who save.

The Finance Minister stated that savings have to be encouraged to boost the economy. The TDS and low interest rates dampen the enthusiasm of savers. Time for Sitharaman’s words
to match her deeds. It’s a necessity not only for savers but also for a nation that is pining for funds.

Arguably, if savings are taken care of, the Government would not have to look for borrowings abroad as the Finance Minister’s speech indicated to spur growth and fiscal management. This swadeshi move would make easy finance available to the Government and save foreign exchange.

Importantly, Sitharaman must do some rework. It would contain inflation which after this budget is likely to rise to 5%. For a $5 trillion economy in nine years, it would require a
growth rate of at least 11% not 8% as the Economic Survey indicated.

With a little vision, Budget 2019-20 can become the real growth propeller and deviate from the residues of Nehruvian economy. —- INFA