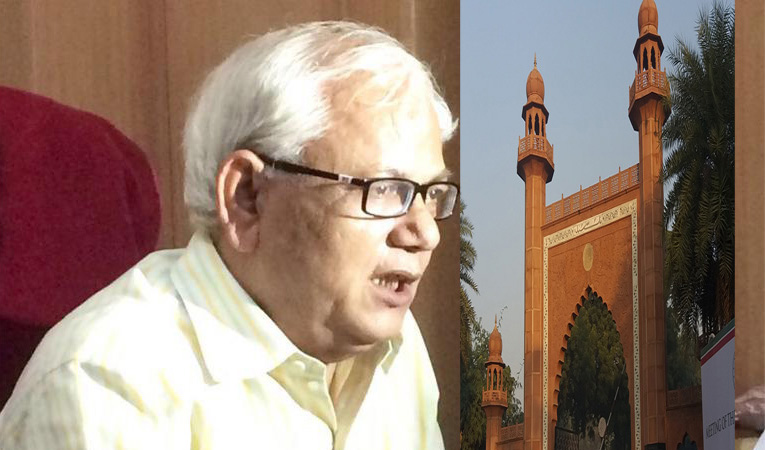 New Delhi: As Aligarh Muslim University(AMU) is poised to complete 100 years of its existence next year, distinguished scholar Dr Rahat Abrar, who has about four-decade long association with the institution, has made a strong pitch for reclaiming its liberal and progressive ethos  which has been the moto of its founding fathers.

Through this journey of hundred years, I would say we have of late been losing something which was intrinsic to the creation of this iconic institution by Sir Syed Ahmad Khan, and this thing as reflected in the words of the founder himself is ”large heartedness, tolerance, pure morality and free-thinking,” Dr Abrar said in a talk with India News Stream.

A university is a place for free interplay of ideas, a place of churning out new thinking out of this process, and if this is not allowed, the very purpose of education is defeated, he said.

This university has produced freedom fighters, has been home to contending ide0logies and ideas in the past, and here the progressive, the liberal, the atheist, the conservative, the leftists, all had their space withing the campus, but it is unfortunate that today the space for difference of opinion was shrinking, which was against the intent of its founder,  said Dr Abrar, who is at present Director of the Urdu Academy of the University, and had served as official spokesperson of the university for about 30 years.

He cited the example of Sir Syed Khan inviting Arya Samaj founder Swami Dayanand Saraswati to his home at a time when he was facing stiff opposition to his proposed reforms in the Vedic dharma.

A session of ‘Ved paath’ (recitation of Vedas) and its exposition by Swami Dayanand was organised by Sir Syed at his home, because he believed in listening to all, in keeping the mind’s window open to all kind of ideas. ”Is this possible at Aligarh today? No,” Dr Abrar said.

Sir Syed was a great social revolutionary who dared to bring the Muslims of the 19th century out of their narrow religious and social closets to go for modern scientific education. And he did so against heavy odds, and needless to repeat the well known fact the India Muslim clergy secured a fatwa from Mecca against the great social reformer, he said.

The idea of setting up AMU came into Sir Syed’s mind after he visited England in 1969 and had first hand experience of leading educational institution of the West including Oxford and Cambridge. When he came back to India, he formed a ”committee for Better Diffusion and Advancement of Learning among Muslims of India” at Benaras.

One of the purposes of this committee was to find why Muslims were resistent to the ideas of modern scientific education.The committee was to examine why Muslim students were lagging behind other students and why there was decline in their percentage in government jobs. Sir Syed sought nationwide response from the community on these questions, and based on the input, the committee prepared a report which underlined the pressing need for Indian Muslims to go for western scientific education while preserving their oriental heritage.

The committee suggested setting up of a separate college for Muslims of India, which led to the establishment of MAO college in 1877. The college acquired the status of a full-fledged Aligarh Muslim University in 1920, Dr Abrar said, underlining that the word ‘Muslim’ here was not to be taken in an exclusivist term, as the door of the institution were open to all, and in fact the first graduate and post graduate of the University were two Hindu students, Ishwari Prasad and Rama Shankar, respectively.

Moreover, he said, Sir Syed from the day first provided for teaching of Sanskrit in the MAO college as he was of strong opinion that Indian ethos could not be understood without the knowledge of Sanskrit.

Aligarh rose to eminence by embracing this liberal-hearted cultural ethos envisioned by Sir Syed, and not by shutting itself out from other ideas and cultures, Dr Abrar said.

When asked whether he was in favour of the university retaining its minority character, he said replied in the positive, adding that the ‘minority character’ was in no way at odds with the intent and nature of our secular and democractic republic.

He also pointed out that Dr Zakir Husain too was of the view that special provisions for study of Islamic religion and theology in AMU and focus on Vedic, Hindu, Buddhist and Jain studies in BHU were in no way in contradiction of the secular provisions of the Constitution.

In his speech in Parliament during a discussion on BHU Amendment Bill in 1951, Dr Husian said, ” A secular republic will have a Hindu University and a Muslim University as central universities, beacuse only a secular republic has the large heartedness, the tolerance and the vision to have both.”

There should be no doubt about the fact that the AMU was established by Muslims out of their own efforts for their educational and cultural advancement, the AMU scholar said, quoting a speech of Sir Syed at the foundation laying ceremony of AMU’s precursor MAO college given on January 8, 1877 in the presence of Lord Viceroy of India Lord Lytton: ” The college of which your Excellencey is about to lay the foundation stone differs in many important respects from other educational institutions which the country has seen. There, have, before, been schools and colleges funded by sovereigns and supported by the revenues of the state. But this is first time in the history of Mohammedans of India that a college owes its establishment not to the charity or love of learning of an individual nor to the splendid patronage of a monarch, but to the combined efforts of a whole community. It has its origin in the causes which the history of this country has never witnessed before.”

Strong leaders in US, Brazil have messed up the crisis, says Nobel laureate

Nearly half of global workforce at risk of losing livelihoods: ILO