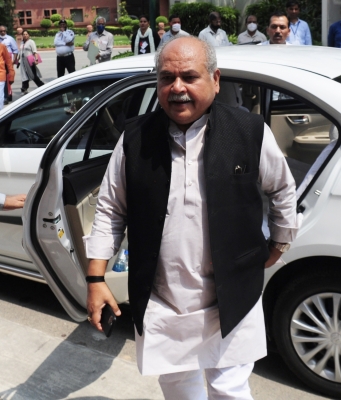 For wheat, there has been an increase in area coverage by 14.53 lakh hectares over last year and this has been the highest ever since the last four years.

As on November 25, total area sown under Rabi crops reported was 358.59 lakh hectares (which is 57 per cent of the normal Rabi area) as compared to 334.46 lakh hectares in the corresponding period of last year. Thus, Rabi area coverage has increased by 24.13 lakh hectares over last year.

Tomar hoped that with favorable soil moisture condition, better live water storage position and comfortable availability of fertilisers across the country, Rabi crops area coverage is expected to accelerate further in the coming days and a good Rabi harvest can be expected.

As per the Ministry of Agriculture, present live water storage in 143 important reservoirs across the country is 149.49 billion cubic metre (week ending November 24). Soil moisture condition during November 15-21 is more than the average of the past seven years in most of the districts.

New Delhi: The National Family Health Survey-5 data shows that 67.1 per cent of children in six to 59 months age group and 57 per cent of women between 15...

Gadag, (Karnataka): The receipt of a farmer from Karnataka's Gadag district showing that he received only Rs 8.36 after selling 205 kg of onions, has gone viral on social media, prompting...

Lucknow, Nov 23 (IANS) The Uttar Pradesh agriculture department has warned that it will stop giving benefits of the PM Kisan Samman Nidhi (PMKSN) to farmers who are found engaged in...

Bhubaneswar: Ahead of the Padampur bypoll, the BJP on Friday launched an indefinite dharna "satyagraha" in front of the Odisha Assembly here to protest "anti-farmer policies" of the BJD government. The...

New Delhi: The Centre on Friday said that there is adequate availability of fertilizers in the country to meet the needs of farmers during the Rabi season. The government is...

SKM urges farmers to continue struggle till all demands are met

New Delhi: Samyukta Kisan Morcha (SKM) on Thursday exhorted the farmers to join the nationwide "March to Raj Bhawans" programmes and submit a memorandum to the President through the respective Governors...

Food inflation has always been a wild card. In October, food and beverages component of Consumer Price Index (CPI) increased by 7 per cent y/y. It had averaged 7.6 per...

Ranchi: The Enforcement Directorate (ED) has sought a detailed report from the rural development department of Jharkhand government into the money laundering case linked to the alleged embezzlement of MGNREGA funds....

The monsoon has packed up from India a few weeks ago, but not without leaving signs that are matters of grave concern. According to latest reports, the erratic monsoon has...